What if a parent remarries?

Family feuds, fueled by inheritance and Will dispute cases, are on a steep rise. Second marriages after property price hikes are believed to be a major contributory factor. If the Ministry of Justice is to be believed, the high court claims to have heard 178 probate disputes in 2014, which is the double what it was the year before, and the highest in England and Wales since 2007.

Most of these cases without ever seeing the inside of a court room and be just the tip of the iceberg. More and more people increasingly expect, and rely upon, inheritances as they haven’t made provision for themselves for their later years. I have seen lots of disputes between second spouses and children from different parents.

An exemplary case is that of a Stuart Herd, who didn’t see a penny of the £300,000 estate that his father William had Willed to his first-born. Please see my previous blog here.

The soaring housing prices have also been cited as one of the major reason for the drastic rise in inheritance tax cases. The huge rise in property values has resulted in thousands of people falling into the inheritance tax bracket proving IHT is now a mass market tax.

It’s so important that that people not only have a Will but have the RIGHT Will. Sadly, two thirds of the UK population still haven’t got around to havi 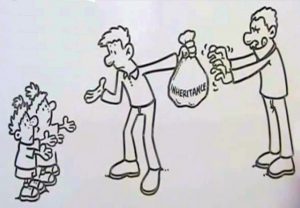 Barnet Wills are more than just Will writers. We are committed to safeguarding your wealth, for your children, grandchildren, or chosen beneficiaries, after you are gone. With a few simple strategies in place your wealth can be protected!

To ensure that that you have the most appropriate. and up to date planning in place, call Barnet Wills for a free review now on 020 3189 1737 or email us at info@barnetwills.co.uk