Just because you’re dead won’t stop banks & solicitors making a fortune from you.

Each year Britain’s high street banks & solicitors earn up a massive £1.25bn in fees for sorting out people’s Wills. That’s around 88% of the market for dealing with a last Will & testament excluding fees from dealing with disputes or challenges.

But, according to some experts, around half of the £1.25bn is “blatant overcharging”. 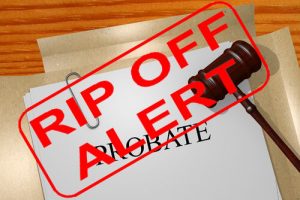 It’s a £600m a year rip-off, where banks & solicitors are charging extortionate fees to sort out small estates. What makes it worse is they prey on grief-stricken families who aren’t in a state of mind to argue or shop around.

Fees for “probate” (the process of dealing with a deceased person’s affairs) can run into thousands of pounds and take months to complete. But unless a person’s estate is large and complex it shouldn’t reach 5 figures as so many do.

Banks & most solicitors nearly always charge by a percentage of the estate’s value irrespective of the work involved. Some solicitors charge an hourly rate plus the percentage.

A bereavement is bad enough but finding out later that you’ve been ripped just piles on the misery.