Assisted dying: an act of love?

“Are you ready?”, asked Graham Mansfield, 73, of his 71-year-old wife Dyanne. “Yes, I won’t make a noise”, she said, before Graham slit her throat in their garden in what amounted to a failed suicide pact.

Dyanne had terminal cancer and asked her husband to kill her if things became “too bad”. Graham agreed, on the condition he’d “go with her”. After slitting Dyanne’s throat, killing her, he slit his own, but survived his injuries.

On 21st July, the jury at Manchester Crown Court cleared Graham of murder but convicted him of manslaughter, handing him a two-year prison sentence suspended for two years. 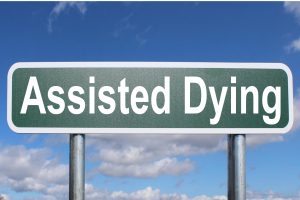 Graham had claimed his actions were “undertaken through duress of circumstance”, with the judge, Mr Justice Goose, stating he was “under immense emotional pressure”, adding that he was “entirely satisfied you acted out of love for your wife”.

Graham stated that his wife “shouldn’t have had to die in such barbaric circumstances… [but] that is what we had to resort to”.

Mansfield’s barrister Richard Orme said: “The complete waste of taxpayers’ money aside, it was not in the public interest to seek any conviction against this gentle and caring man. The sooner the law changes the better.”

“He should never have been charged and in the future he probably wouldn’t have been. The law in this country is brutal and needs to catch up with other countries throughout the world.”

Assisted suicide is currently illegal under the terms of the Suicide Act (1961) and is punishable by up to 14 years’ imprisonment. While it is unlikely that the law will change so fundamentally overnight, there is no doubt that the appetite for reform is growing.

A recent parliamentary petition, sponsored by Dignity in Dying, to legalise assisted dying for terminally ill or mentally incompetent adults recently received 155,803 signatures, and was subsequently debated in parliament.

During the debate, nearly twice as many MPs spoke in favour of legalising assisted dying as those in opposition.

As well as this, the Assisted Dying Bill brought by Baroness Meacher is currently going through the House of Lords, though there has been no notable update to this since April.

Indeed, politicians in Jersey voted to legalise assisted dying in November, with 78% of the citizens’ jury voting in favour of changing the law. This is only applicable to those who are an adult resident of Jersey, have a voluntary and informed wish to end their own life, and have the capacity to make the decision to end their own life. They must also have been diagnosed with a terminal illness, which is expected to result in “unbearable suffering that cannot be alleviated and is reasonably expected to die within six months“; or, “has an incurable physical condition, resulting in unbearable suffering that cannot be alleviated“.